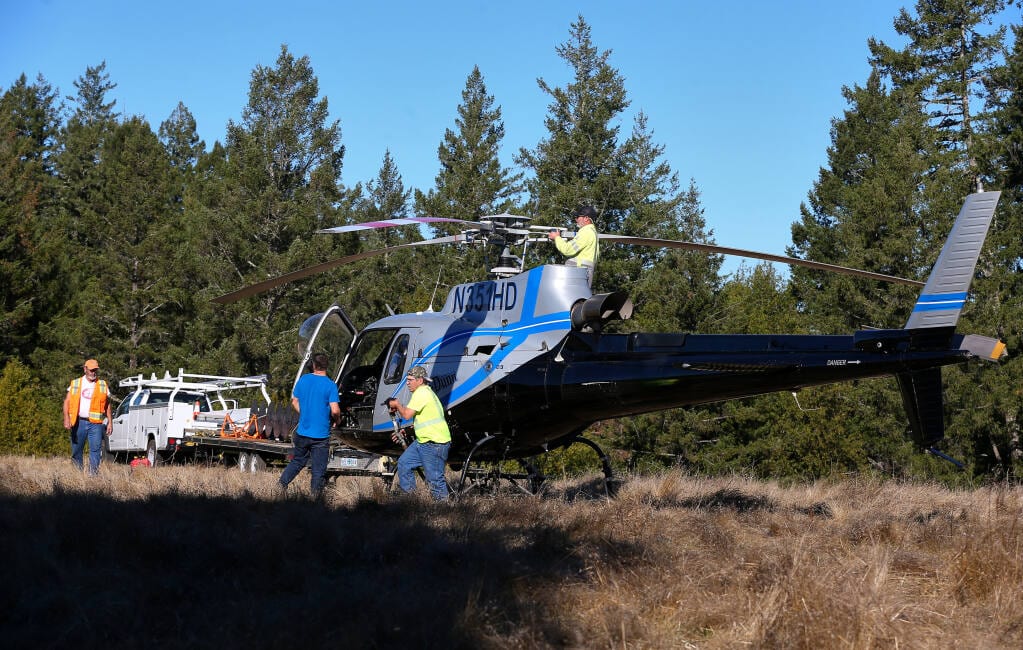 Long-standing power and gas supplier, PG&E, recently introduced a new vegetation management measure in Sonoma County, with the start of its tree-trimming helicopter operations. Although the utility company says it has been using this measure since at least 2017 in Mendocino and Humboldt counties, the “Heli-Saw”, operated by Oregon-based Heli-Dunn, made its first appearance in Sonoma County in December 2020.

The new machinery was introduced to help the energy giant improve brush and tree clearance along its nearly 100,000 miles of power lines in North and Central California. This is expected to help prevent avoidable wildfires, many of which caused devastation across California throughout 2020.

Wildfires have become a very dangerous environmental hazard in California, with some of PG&E’s power lines and equipment blamed for recent ferocious blazes. The utility provider, alongside many other utilities in the state, was forced to pay out billions of dollars to settle lawsuits filed by law firms, including Singleton & Schreiber, on behalf of victims.

It is hoped that this measure will help PG&E better fulfill its management responsibilities, and work proactively to prevent danger from the estimated 120 million trees that have the potential to grow or fall into power lines.

35-Foot Saw-Toting Helicopters
Heli-Dunn maintains a fleet of four 35-foot plus Astar 350 helicopters that were pressed into service for tree-trimming duties. Each of the helicopters carries a set of eight saw blades attached to a 100-foot pole that can be rotated 360 degrees. The pole is suspended vertically from the helicopter which uses a hydraulic system to rotate the pole, as well as spin the blades.

According to officials of the company, the Heli-Saw can operate in adverse weather, including snow and rain, with winds up to 15 mph. However, fog is stated to be a problem as it limits visibility, making the operation potentially unsafe. The machine flies between 200 to 500 feet above ground, and at speeds around 15 mph when put to work trimming trees.

The Heli-Saw requires at least 15-feet between power lines and the trees in order to avoid entanglement with the lines. The machinery is especially pressed into service for harder-to-reach areas such as canyons, and “dense areas of coniferous forests”. The sharp rotating saws and the speed of the helicopter also mean it can perform these maintenance tasks far quicker than ground crews – taking mere days for work that would otherwise take several weeks, at the earliest.

The Heli-Saw was recently deployed along 46 miles of high-voltage power lines on the coastline of Sonoma and Mendocino counties. This began from Fort Ross in Sonoma County to Fort Bragg, Elk, Gualala in Mendocino county.

Likely impact of new vegetation management measure
PG&E has come under criticism in the past for its failure to proactively manage the vegetation around its power lines and connected equipment. According to statistics from CAL Fire, the utility company’s electrical network was linked to 5 of the 10 most destructive fires in California since 2015. These include the Sacramento fire in 2015 that devastated over 70,000 acres and killed two people, as well as the Camp Fire, which destroyed more than 14,000 homes and resulted in 85 deaths.

The company also has a history of safety problems that have victimized California residents, including a 2010 gas pipeline explosion that killed 8 people and destroyed a suburban community. These longstanding safety problems have prompted multiple investigations involving the company and attracted the attention of several regulatory agencies.

The new tree-trimming measure introduced to Sonoma County and environs however indicates that the company is willing to respond positively to these concerns. With the potential for safe, speedy, and effective vegetation management that the Heli-Saw promises, the company should be able to undertake more efficient preventive actions.

The onus on PG&E extends far beyond just tree-trimming though. Considering the flawed reputation of the company, especially when it comes to general maintenance and safety practices, concrete efforts must also be taken to proactively identify and replace faulty, outdated, or compromised equipment.

In the interim, however, the new measure will be expected to help ensure the safety of the more than 16 million Californians that rely on PG&E for utilities, as well as their property.