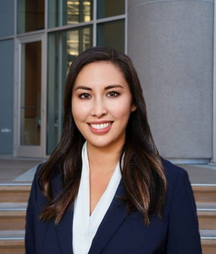 Christine graduated from California Western School of Law in 2015 and is admitted to practice in California state courts. She earned her bachelor’s degree from Scripps College. Currently, Christine represents victims of the Camp Fire, Thomas Fire, North Bay Fires, and Butte Fire. Before joining the Singleton Schreiber, she served as “second chair” attorney in a title insurance case Balaz v. First American Title Insurance Company (Case No. 37-2013-00058789-CU-IC-CTL) that resulted in a unanimous and favorable jury verdict. As a law student, her internships involved the intersection of Intellectual Property law and new media such as Twitter and YouTube.

Prior to her legal career, Christine worked at a veterinary clinic in Santa Barbara and continues to enjoy volunteer work with animals. Christine grew up overseas in a Foreign Service family and hopes to one day visit every continent, including Antarctica.