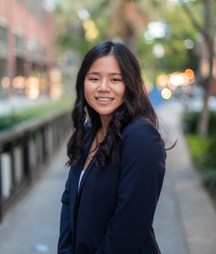 Emily Min is an associate attorney in the Sacramento office of Singleton Schreiber and a member of the firm’s mass torts, fire litigation, and civil litigation divisions. Before joining Singleton Schreiber, Emily interned for a variety of firms in Reno and Las Vegas, NV and Poughkeepsie, NY, and was a Judicial Extern for the U.S. Bankruptcy Court District of Nevada.

Emily graduated from University of California, Davis – School of Law. During law school, she received a Witkin Award for Legal Research and Writing and was also the Senior Articles Editor for the Business Law Journal.

Emily received her undergraduate degree in Science, Technology and Society from Vassar College in New York. While at Vassar, she was part of the Vassar Devils, an a cappella group. The group performed at the White House for President Obama and the First Lady Michelle Obama at their annual Holiday Gala and released two professionally recorded albums.