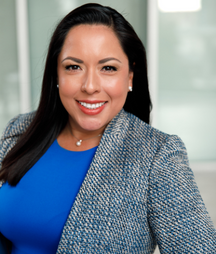 Joana Michelle Brooker is a California native. She graduated from San Diego State University with a bachelor’s degree in Psychology. During her undergraduate studies, Joana interned at mental health facilities for adults with severe mental illnesses. She became fascinated by the legal field when she interned at the Family Justice Center in downtown San Diego. She then went on to obtain her paralegal certificate at the University of San Diego. After working as a paralegal for several years, Joana decided to go to law school.

Joana attended law school at California Western School of Law and is admitted to practice before California state and federal courts. During her time as a law student, she held internships in the public and private sectors. Some of these positions included interning with Honorable Gregory W. Pollack at the San Diego Superior Court and with the City Attorney’s Office in Chula Vista.

Joana represents wildfire victims against giant utility corporations. In doing so, she applies her legal and undergraduate skills to emotionally sensitive discussions with clients devastated by fires.

When Joana is not seeking justice for her clients, she enjoys hiking, playing tennis, traveling, and spending time with her two rescue dogs and fiancé.