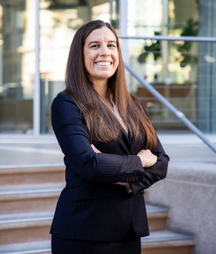 Kimberly Trimble was born and raised in Connecticut. She moved to California to attend Claremont McKenna College, where she graduated magna cum laude and earned the award for Best Overall Achievement in her major of Philosophy. She then joined Teach for America in Miami, after which she attended law school at American University – Washington College of Law (WCL) in Washington, D.C. In law school, she served in various roles and received several awards on both the WCL Moot Court Honor Society as well as the American University Law Review. She graduated magna cum laude and was elected to the Order of the Coif. She then served as the pro se law clerk in the United States District Court for the Eastern District of Virginia in Alexandria, VA for one year, followed by a one-year judicial clerkship for the Honorable Dolores K. Sloviter in the United States Court of Appeals for the Third Circuit in Philadelphia, PA. Upon the conclusion of that clerkship, she moved to San Diego to join the Federal Defenders of San Diego, where she worked for over 8 years as both a trial attorney and an appellate attorney. She completed numerous jury trials, bench trials, and oral arguments before the United States Court of Appeals for the Ninth Circuit. She was also a core member of a legal team that had an oral argument in the Supreme Court of the United States, as well as a core member of a legal team that represented an individual charged with capital offenses. She joined the firm in the fall of 2020. Kimberly is admitted to practice in California state and federal courts and is also an inactive member of the Virginia State Bar. Kimberly spends much of her free time on her bicycle, weightlifting, hanging out with her rescue dogs, and competing on her horses. She travels as often as she can and particularly seeks out outdoor adventures like hiking the Inca Trail, scuba diving in Belize, and going rock climbing in Thailand.