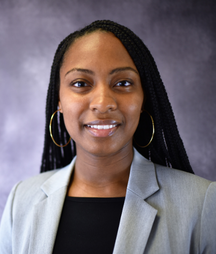 Tatyana Hopkins is an associate attorney in the Motion, Writs & Appeals practice group.

A recent law school graduate and newly admitted attorney to the District of Columbia Bar, Tatyana has long been a dedicated advocate for social justice. Having a legal education rooted in system change and social justice, Tatyana’s legal scholarship called for responsiveness to a broad range of issues affecting marginalized communities. Often with a strong focus on how institutional systems and structures disproportionately impacted Black communities, her work included policy and direct-impact projects as well as publications centered on juvenile, economic, voting, and environmental justice.

For two years, Tatyana also served as the Notes editor of the UDC Law Review, a student-run periodical that aims to publish articles addressing legal issues of social concern and as well as embodying the theme of community activism and service. Upon graduation in 2022, Tatyana was awarded the Richard H. Semsker Prize in Civil Rights Law for her demonstrated commitment to civil rights law and intent to work in the field of civil rights law.

Prior to law school, Tatyana wrote for member newspapers of the National Newspaper Publishers Association—a national association of Black-owned newspapers. As a journalist, she covered the Flint water crisis and the efforts of Congressional Black Caucus members to call attention to the ongoing crisis, issues of concern to Black residents in Washington, D.C., as well as recovery efforts in Puerto Rico post-Hurricane Maria.

Tatyana completed her Bachelor’s of Arts in Journalism at Howard University, and received her Juris Doctorate from the District of Columbia David A. Clarke School of Law.