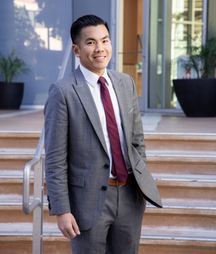 Tommy Vu graduated from the University of California, Los Angeles (UCLA) and the University of California, Hastings College of the law.  In law school, he was a Judicial Extern to the Honorable Larry Burns of the Southern District of California.  After graduating law school in 2010, Tommy was a Trial Attorney at the Federal Defenders of San Diego until 2016. He has tried cases before both a jury and judge and argued appeals before the United States Court of Appeals for the Ninth Circuit. He was an Associate at an Am Law 100 law firm in New York City.  As an Associate, Tommy served as a member of the Criminal Justice Act (CJA) Panel in the Southern District of New York representing indigent clients pro bono.

With litigation experience in both civil and criminal cases, Tommy returned home to San Diego, California, and joined Singleton Schreiber.  Tommy is admitted to practice law in California, New York, and Washington D.C.

In addition to living all over California, Tommy has also called Hanoi and New York home.  He enjoys traveling internationally, eating to his heart’s content, and playing poker with friends.