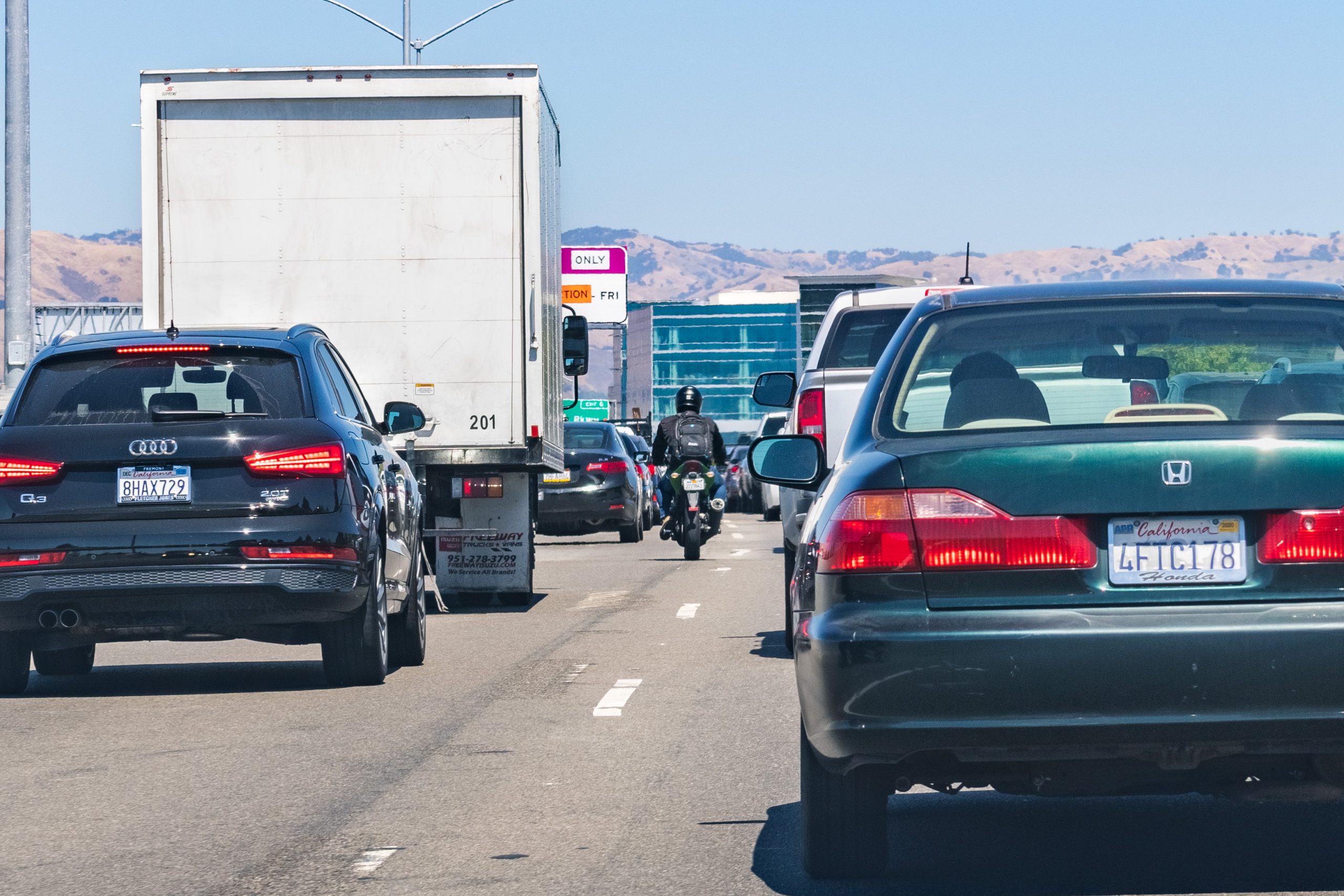 California drivers often see motorcyclists whiz by on the freeway, squeaking by, either in the same lane or between the two far left lanes.  This practice is called “lane splitting.”  And it is generally legal in California.

The California Vehicle Code defines lane splitting as “driving a motorcycle . . . between rows of stopped or moving vehicles in the same lane . . . .”[1]

This lane-splitting law, which went into effect in 2017, also tasked the California Highway Patrol with developing “educational guidelines relating to lane splitting in a manner that would ensure the safety of the motorcyclist and the drivers and passengers of the surrounding vehicles.”[2]

2.       What should drivers do when faced with lane splitting?

For drivers faced with motorcycle riders in the same lane, the California Highway Patrol explains the following:

While not guaranteed to keep motorcycle riders and drivers safe, the California Highway Patrol has also issued “general safety tips” to assist in the practice of lane splitting.  Of course, every motorist–whether driving a car or riding a motorcycle–has the ultimate responsibility for their own decision making and safety.

The California Highway Patrol cautions generally that, “Lane splitting can be dangerous and extreme caution should be exercised.  It should not be performed by inexperienced riders.  The risk of death or serious injury during a lane splitting collision increases as speed and speed differential increases.”

There are, therefore, certain things that both drivers and motorcyclists should keep in mind when it comes to lane splitting.

4.       Why does California allow lane splitting?

California is the only U.S. state where motorcycle lane-splitting is generally legal.  Utah and Montana have laws that allow something similar, under very specific conditions, but not to the extent allowed in California.  Why is California the only state to freely allow lane splitting?

“California recognizes lane-splitting as a tool to decrease traffic congestion, and the volume of freeway traffic here is higher than in most other states.”[4]

If a motorcycle is lane-splitting, then the motorcycle is not occupying a vehicle space on the freeway because the motorcycle is driving between lanes or sharing a lane with another vehicle.  Allowing motorcycles to lane split thus cuts down on the number of vehicles in a freeway lane, so there is less traffic congestion for all drivers.

As one CHP motorcycle officer explained, “As motorcycles are moving through, splitting the lanes . . . that’s one less vehicle occupying that lane.”[5]  “It’s saving the average motorist in a car time,” he added.  “If we were to . . . not allow lane-splitting anymore, that’s a motorcycle sitting in the lane ahead of them.”

When it comes to lane splitting, there is little data on overall safety.  To get data on whether lane splitting in general is safe, researchers would need to collect “pre-crash data from motorcyclists who lane split and those who don’t, and see if one population is more likely to get into a crash than the other in order to determine the safety of the practice overall.”[7]  This broad category of data, however, is not easily obtainable.

Instead, researchers have looked “at motorcycle collisions that have occurred, and determined whether lane-splitting poses a greater risk of injury to riders, and whether the manner in which riders were lane-splitting was predictive of particular injury types.”[8]

The analysis conducted by researchers at UC Berkeley’s Safe Transportation Research and Education Center (SafeTREC) found that lane-splitting is safer if (a) it is done in traffic moving at 50 mph or less and if (b) motorcyclists do not exceed the speed of other vehicles by more than 15 mph.

The lead author of the Berkeley study commented: “Surprisingly, we found that the difference in speed between the motorcycle and the surrounding traffic was a bigger predictor of injury than speed alone.”  “Above a 15-mile-per-hour speed differential, the risk of injury rose significantly.”

“[W]hen lane-splitting motorcycle riders are involved in collisions, the most common scenario is a rider traveling too fast when a motorist attempts to change lanes,” said the Berkeley study author.

Thus, for safety purposes, “any efforts to encourage riders to lower their speed differentials will prevent collisions and injuries.”  On the same token, drivers of cars and trucks need to have “a heightened awareness . . . about motorcycle lane-splitting.”

6.       Are there differences between motorcyclists that practice lane splitting and those who do not?

The same Berkeley SafeTREC study discussed above also found that, compared with other motorcyclists, lane-splitting motorcyclists were significantly different than other riders involved in a collision.

In sum, there is ample room for more research on the safety of lane splitting.  For now, it remains legal in California.

7.       What should someone do if they have been involved in a motorcycle accident involving lane splitting?

If you are a motorcyclist who was injured while lane splitting safely (for example, in traffic moving 40 mph or less, and not riding more than 15 mph faster than surrounding traffic), you may have a legal claim.

On the other side of things, if you were a driver or passenger in an accident that was caused by a motorcycle practicing unsafe lane splitting, you may also have a legal claim.

Whether you drive a car or ride a motorcycle, if you have been seriously injured because of someone else’s negligence, recklessness, or other misconduct, you may be entitled to compensation from those who harmed you.

We invite you to call us to consult with one of our experienced California personal injury attorneys.