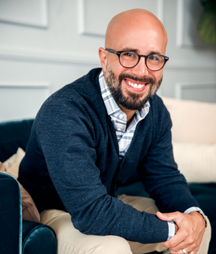 Ben is a Certified Appellate Specialist, and head of the firm’s Motion, Writs & Appeals practice group.

Ben has an extraordinarily high winning percentage in the appellate courts, with notable wins in the California Supreme Court, Nebraska Supreme Court, Ninth Circuit, and the California Court of Appeal. Ben has been even more successful with law-and-motion in trial courts. Between 2020 and 2021 alone, Ben defeated motions for summary judgment in cases with an aggregate value of $100 million.

In 2018, Ben received the “Appellate Advocacy Award” from the Pound Civil Justice Institute in Washington D.C., which “recognizes excellence in appellate advocacy in America.” Ben received the award for T.H. v. Novartis Pharmaceutical Corp., 4 Cal.5th 145 (2017), a landmark decision by the California Supreme Court that greatly expanded rights for victims of mislabeled drugs.

In 2021, Ben received the “XONR8R Award” from the California Innocence Project for his pro bono work in Larsen v. California Victim Compensation Board, 64 Cal.App.5th 112 (2021), which expanded the rights of wrongfully convicted persons to receive compensation for their time spent in incarceration.

Ben graduated Order of the Coif with High Distinction from the University of Nebraska College of Law, where he was the Editor-in-Chief of the Nebraska Law Review and earned numerous honors and awards, particularly for his legal research and writing.

Outside of his case work, Ben is a member of the Committee on the Appellate Courts, a select, state-wide group of appellate lawyers in the public and private sector that influences rules and procedure in California’s appellate courts.

Please see the “Case Results” tab for some of the recent cases that have earned Ben a reputation among trial lawyers throughout California and the United States for consistently winning difficult appeals and motions in high-stakes cases against the biggest defendants.

In a case of first impression, Ben persuaded the California Court of Appeal to affirm the trial court’s ruling that Novartis’s counsel waived the attorney–client privilege when they failed to promptly ask the plaintiffs to return a privileged document that Novartis inadvertently produced in discovery.

Working pro bono for the California Innocence Project, Ben persuaded the California Court of Appeal to hold that, under California law, a wrongfully incarcerated prisoner who establishes he is “factually innocent” under the U.S. Supreme Court’s decision in Schlup v. Delo, 513 U.S. 298 (1995), is entitled to automatic compensation for his time spent in prison. The decision was notable because, in agreeing with Ben, the court expressly rejected a published decision issued by a different division of the same court just two months earlier. Ben was awarded the 2021 “XONR8R Award” by the California Innocence Project for his work in this case.

Ben successfully defeated the defendants’ appeal from an $11 million medical-malpractice judgment following a jury verdict in favor of a young woman who suffered a severe brain injury during a medical procedure.

Ben’s amicus brief on behalf of the Nebraska Association of Trial Attorneys persuaded the Nebraska Supreme Court to abandon the parental-immunity doctrine, which prohibited minors from suing their parents for most torts. At the time, Nebraska was one of seven states—including Alabama, Arkansas, Colorado, Georgia, Indiana, and Louisiana—to recognize the doctrine.

Ben persuaded the Ninth Circuit to reinstate a lawsuit by consumers who alleged they were defrauded into purchasing eye examinations from purportedly “independent” optometrists who were actually under Walmart’s extensive control as part of a scheme to sell more prescription eyewear.

After losing to Ben in the California Court of Appeal in T.H. v. Novartis Pharmaceuticals Corp., 245 Cal.App.4th 589 (2016), Novartis — joined by members of its powerful lobby, including the U.S. Chamber of Commerce, the drug industry, and the defense bar — appealed to the California Supreme Court. Ben and his co-counsel (Leslie Brueckner of Public Justice), persuaded the California Supreme Court to affirm the Court of Appeal’s decision. The resulting majority opinion broke with over 90 decisions from state and federal courts in other jurisdictions and became the first standing state supreme court decision in the United States to recognize that consumers injured by generic drugs have a cause of action against even brand-name manufacturers who negligently failed to add necessary warnings to the drug’s label. For their work in this case, Ben and Leslie received the Pound Civil Justice Institute’s 2018 “Appellate Advocacy Award,” a national award that “recognizes excellence in appellate advocacy in America.”

Ben persuaded the California Court of Appeal to reinstate a lawsuit that two minors brought against the brand-name manufacturer of an asthma drug for failing to update a drug label with warnings regarding the drug’s potential to disrupt fetal brain development. The minors alleged they were injured when an OB/GYN gave their mother a generic form of the drug to treat preterm labor. The Court of Appeal’s decision reinstating the lawsuit was just the third published appellate decision in the United States to recognize that consumers injured by generic drugs have a cause of action against brand-name manufacturers who negligently failed to add necessary warnings to the drug’s label, and was the first decision in the United States to expressly recognize such claims against a former brand-name manufacturer.

Ben defeated a motion for summary judgment in a personal-injury action arising out of a head-on collision during a media event for Robb Report magazine. One of the defendants (Penske Media Corporation) sought summary judgment on the grounds that the at-fault driver was an employee of its subsidiary, and therefore that it was not liable for the plaintiffs’ catastrophic injuries. The trial court agreed with Ben that Penske could be treated as the driver’s employer under a novel agency theory.

Ben defeated a motion for summary judgment in a case arising out of a multiple-fatality collision at an intersection between a county road and state highway. The case presented the novel theory of whether an intersection is in a dangerous condition if the conditions of the roadway cause motorists to ignore an otherwise unobstructed “Stop” sign. The case also involved the question of whether a public entity can be held liable under a failure-to-warn theory if it is entitled to design immunity for the same public improvement, a question on which there is currently conflicting appellate authority. The trial court agreed with Ben on both issues, and denied the motion for summary judgment. The Court of Appeal subsequently denied writ review of the trial court’s order by a 2–1 vote.

Ben defeated a motion for summary judgment in an insurance-bad-faith lawsuit arising out of an insurance company’s failure to settle a medical-malpractice lawsuit, resulting in a $6 million excess judgment against its insured. The underlying medical-malpractice lawsuit arose when a vocational nurse mismanaged an infant’s breathing tube, resulting in permanent brain damage.

Ben defeated a motion for summary judgment in a wrongful-death case brought by the widow and minor son of a man who committed suicide while in the custody of a mental-health facility to whom he had been admitted for psychiatric treatment.

Ben defeated a motion for summary judgment in wrongful-death and personal-injury lawsuits brought by dozens of victims of a mass shooting at a UPS facility in San Francisco against the security contractor responsible for access control at the facility.

After persuading the California Court of Appeal and California Supreme Court to reinstate the case, Ben defeated a motion for summary judgment in this long-running lawsuit against Novartis for failing to issue adequate warnings regarding its drug’s potential to disrupt fetal brain development.